A few months ago, the owner of Classroom Friendly Supplies contacted me and asked if I would review their pencil sharpener.  Any pastellist who uses pastel pencils knows that a good sharpener is hard to find.  Pastel inevitably breaks off and clogs the sharpener.  Always on the lookout for a great sharpener, I was very happy to have the opportunity to try it.

The last time I reviewed a sharpener, I was impressed at first, but soon disappointed (see the review).  This time, I wanted to use the sharpener consistently for a few months to be able to give a better assessment of how the sharpener performs over time.  Since any new sharpener I try must compete with my Creative Mark Multi-Point for favorite sharpener status, I’ll be comparing it to the Multi-point in this review.
Overall, I like this sharpener.  Right out of the box, what impressed me was its style.  It is slightly more compact (and slightly heavier) than the Multi-Point, sort of retro looking, and has a metal body (the Multi-Point has a plastic body).  It’s a sturdy sharpener.  Like the Multi-Point, the Classroom Friendly Sharpener comes with a clamp.  This clamp works better than the Multi-Point’s but it didn’t take me long before I abandoned it.  It’s just unnecessary.  (I’d still like one with suction feet, but no one seems to make them that way.) 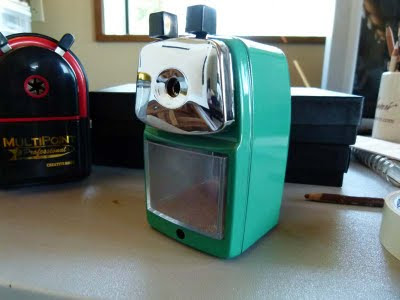 
Other than the metal body, this sharpener is very similar to the Multi-Point, so I was particularly interested to see how it would compare to my favorite sharpener.  I fed it a pastel pencil and turned the crank - wow, did I get an amazingly sharp point!  It has an automatic stop, like the Multi-Point, but it was quite a while before I noticed it.  The feel of the automatic stop is more subtle than the Multi-Point, and a little bit of pressure on the feeding mechanism will allow it to keep sharpening.  This is good if you want a super sharp tip, but if you’re not careful it will eat the pastel pencil. 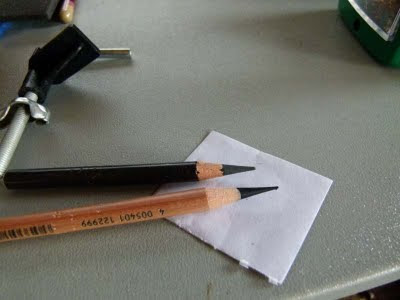 Check out these super sharp tips!


Like the Multi-Point, this sharpener leaves bite marks on the pastel pencils (this doesn't bother me in the least, but if it concerns you, don't buy either sharpener).

You're in the EBSQ Friday Five.

I saw your review on EBSQ. I'm very glad you reviewed these because I'm always on the lookout for a good sharpener, so I'm going to buy one. Right now I'm using the small hand-held sharpeners because they eat less of the lead, but I want to try this one too.

Thank you, Annie - I'm glad you found it helpful. I hate using hand held sharpeners, but you're right, they do eat less of the pastel. I hope it works great for you!

thanks for the info on the sharpener. I'm always looking for that "perfect sharpener".

I am, too, Hilda. I've got another one to try, whenever I can get over to a staples and buy one. Maybe that will be the perfect one. Until then, the search continues... :) 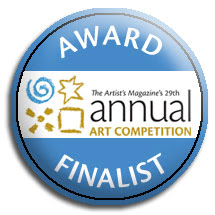